Over the course of the last 25 years, SPEC has assisted in the planning and followed through with detailed engineering, design, procurement, and sometimes construction management of the phased development of this terminal. These seven tanks completed the development of the southwest corner of this terminal, and brought the total number of tanks installations designed by SPEC in the 25 year period to 39. Like most of the other tanks, these tanks are designed for drain-dry operation to facilitate changing service between clean products. The tanks have internal floating roofs, and fixed vapor collection piping to collect vapor whenever the roofs are landed to change service in the tanks. Suction and fill lines connect to sumps in the bottom of the tanks, allowing normal operation with low tank heels and maximizing working capacity with the internal roofs still floating. Suction and fill lines are sloped to the fill/suction manifold, allowing them to be drained completely when necessary for change in service.

SPEC designed the original manifold for the first tank expansion in the early 1990's, and a new manifold in 2011 in the southwest area to serve these tanks and the 6 that preceded them in that area. Some of the 7 tanks in this project were constructed in an area that had been filled over the years, requiring substantial geotechnical evaluation and assessment. The final design specified the closely monitored application of concrete deep soil mixing to minimize settlement of the tanks and the area through which the tank lines were buried. 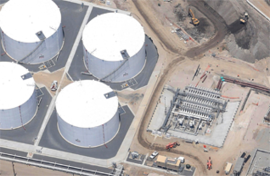 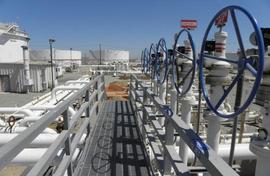 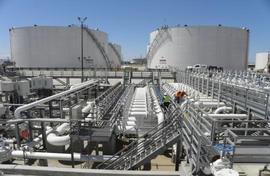